hey!i've completed my sewing project!:)haha..i could only sew one dress due to i want more rest before going back to klang.hehe.malas pon ada..my project will be continued on december lah.more holidays coming.hehe. 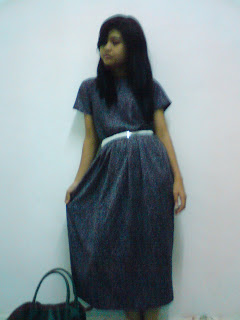 me wearing the dress which i sew it myself. actually i want to add puffy sleeves and make it look like a puffy dress but i ended it by sewing simple sleeves. The result still satisfying me but i need to learn more about sewing..i just know basic sewing la..n main hentam je.hahaha 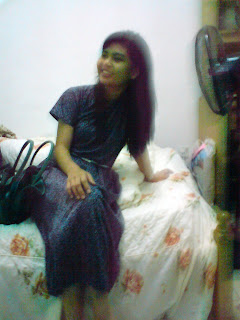 *After the pics were taken, i continued repairing the dress. i add buttons at the end of the sleeves to make it puffier n looks fit with my arm.
Posted by ReYNa at 10/28/2008 03:27:00 PM 4 comments: Links to this post 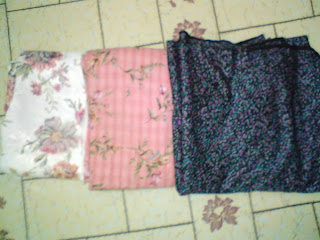 i've got these vintage pattern fabrics given by my mother who bought these for me at morning market.its super cheap!She also bought a burberry pattern look like fabric at the same place which cost only RM2!huhu..i forgot to take the picture of that fabric coz i've already sent it to the tailor to make a skirt.hhehe..i was like too sayang laa for that fabric if i sew it myself.I might damage the fabric!I dont want to take the risk..i am a beginner n just know a little about sewing...tapi gatal nk gak jahit.therefore,,during this 5 days holiday,i'm thinking to sew a top or dress..lets see what happen to these fabrics:)
Posted by ReYNa at 10/25/2008 05:18:00 PM 6 comments: Links to this post 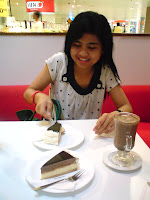 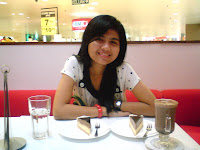 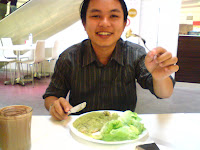 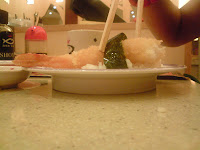 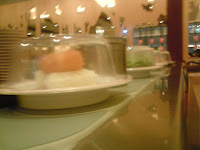 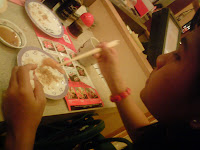 we went to delifrance @ sunway pyramid as my bf really want to eat smoked salmon.huhuh 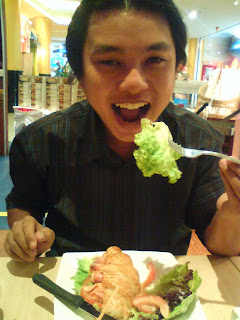 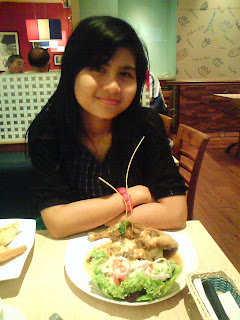 i chose chicken frostier as my lunch.hmm..quite ok but i prefer kenny rogers or dave's deli instead.but the presentation?walllaaaaa..haha
Posted by ReYNa at 10/14/2008 12:12:00 AM 6 comments: Links to this post 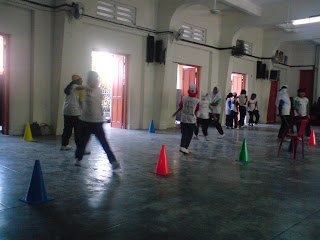 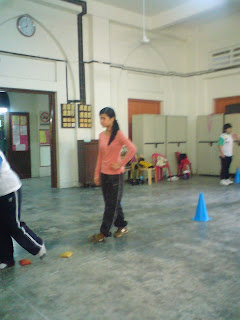 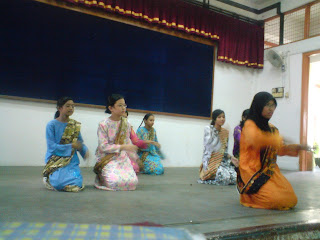 takde apa sgt.huhuh.saja nak letak pics..but that day caused me tired too after taught the student how to play keting-ting..do u know what is keting-ting/ting ting?it is a traditional game which young girls love to play..during my childhood i also loved to play this game...n not to be forgotten,,batu seremban,congkak n galah panjang..all these traditional games were also included in the carnival..besides traditional games,,the carnival also have other activity such as traditional dancing,build a tent n also explorace+masak2..haha..but i incharged for traditional games..jadi penatlaa lompat2n ngan budak2..eee,seronoknya jadi budak2...jelesssss..tapi kesian bdk convent ni bkn pandai main pon traditional game..jenuh i nak ajar...kesian bdk zaman sekarang.huhu
Posted by ReYNa at 10/13/2008 04:02:00 PM 2 comments: Links to this post

After i paid the pictures..then off to JPM again.,.thank to Allah coz the interiview session still not finish yet,..terima kasih mama n papa coz gave me the name yg start huruf R..haha..maybe laa coz my name last2 gituu..nk bg nama anak huruf hujung2 gak lah...hehehe

so..the moral of this story..plz check all the documents according to the letter n never miss a thing!study rajin pasal isu semasa n hafal lah nama menteri2..GD LUCK to those who will be having interview with SPP:)
Posted by ReYNa at 10/08/2008 04:24:00 PM 3 comments: Links to this post

Today i read about smoking in new straits times.It was so sad to know that mostly teenagers in malaysia were having this addicted habit problem.Therefore, as a concern citizen, i copied this from nst online n hope the smokers would read these n try to overcome their habit..peace

They picked up the smoking habit in primary school, first out of curiosity, then to fit in with the crowd and later to release tension. Many of them got hooked and started lying and hiding the habit from their families. Now they want to quit, RINA DE SILVA writes

SET up in 2004, The Tanglin community polyclinic is the Health Ministry's best performing Quit-Smoking clinic in the country.More than 500 people have visited the clinic since 2005. The success rate at the clinic has been rising steadily. It was 24.2 per cent in 2005, 35.8 per cent in 2006 and 51.2 per cent last year. The health ministry said the average quit rate nationwide was between 10 and 15 per cent. This year, 68 smokers seeking help, visited the twice-weekly clinic and over 30 per cent of the visitors are teenagers. Last year, the number of teenage visitors was less than one per cent. The clinic's counsellor and staff nurse Swinder Jit, recently added an extra weekday to accommodate the increasing number of teenage visitors.
Swinder does the counselling herself, using her no-nonsense approach.

"How can you smoke when you are having asthma?," she asked a 14-year-old rather firmly but with a concerned tone in front of the teenager's mother.

"Look, your lips are turning black," she tells another teenager with a worried look.

She also listened in disbelief when smokers tell her they resumed smoking because the medication had run out.

"I always warn them not to expect me to believe this lame excuse," she said.

In their first session, smokers are made to take a pledge before Swinder and a witness that they will stop smoking from the day they registered at the clinic.
The smokers then come for follow-up visits to reinforce their efforts to quit smoking for good. The session begins with the teenage smokers being told to empty their pockets. If they hesitate, the 53-year-old Swinder gives them an understanding look and assures them.

"We don't judge you by how many cigarettes you smoke. Remember honesty is the best policy," she said.

She then confiscated the items and probed their smoking habits and their reasons for wanting to quit. Then the experienced nurse lectured on why smoking was bad by drawing the smokers' attention to a graphic skeleton with severe body damage.

"Smoking affects your whole body. The cigarette contains 4,500 chemicals that can damage your body," she said, adding that the chemicals included rat poison, moth ball and ammonia.

The teenagers expressed their surprise when they heard this.

She assured them that once they stop smoking they could heal their bodies quickly.

After the alarming lecture, she gave tips on how they could break the habit.

"Don't hang out with people who smoke. Mix with non-smokers. Go to the swimming pool and the education park," she said.
She said the trick to stop smoking was to stop thinking about smoking.

"Divert your thoughts to studies, your future, movies, games and dating," she said.

"When your friend offers you a cigarette, say 'tak nak' (no thanks)."

When the urge came, wait for three minutes, she advised.

"The urge to smoke would usually disappear after three minutes," she added.
After hearing the tips, the teenagers asked her if the water pipe Shisha was better than cigarettes.

"No, no, shisha is just as bad. You cannot replace one with another. It is also illegal for you teenagers to take shisha," she said.

After the question-and-answer session the teenagers were given a notebook to record their progress. Swinder then gave them a pack of nicotine replacement product they can take whenever they feel the urge to smoke. She ended the session by scheduling their next appointment and gave her final words of comfort. 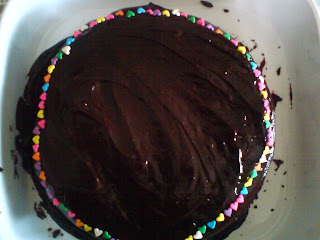 yummy chocolate cake made by me n boboy! 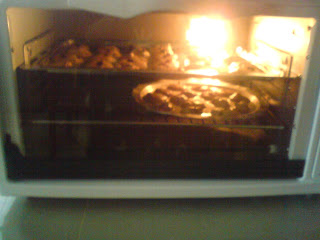 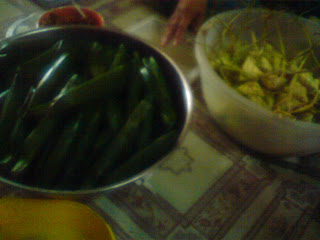 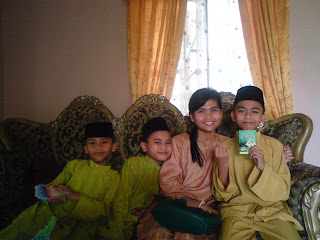 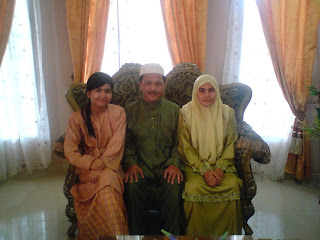 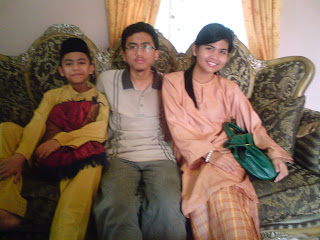 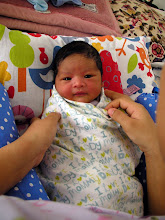 ♥Shopping for Mama and Baby♥